I have searched for fanart and fanfiction for this TV-series, but to my surprise and dissapointment I have found none. Here is my little contribution to what I hope will eventually become a fandom... 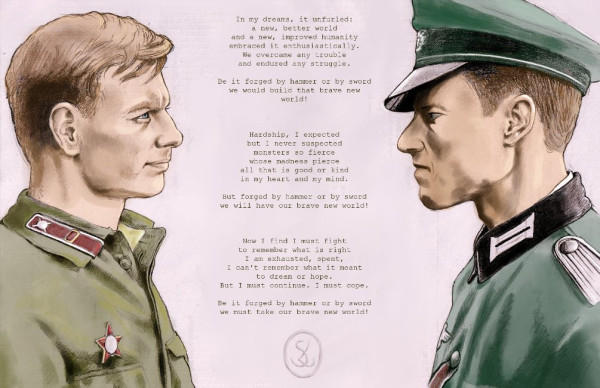 An unknown Soviet officer and Wilhelm Winter facing off in the first episode. I made the first draft of both the poem and the picture directly after seeing that episode. The TV-series is not primarily about political fanaticism, but my imagination ran away with me...

I am trying to learn to sail this summer. While working on that, I started rewatching the Hornblower TV-series for the third time. That inspired me to draw, and even try to write a story. I believe I am a better artist than writer - at least I am faster and more productive when painting. The story is far away from any publishing yet. 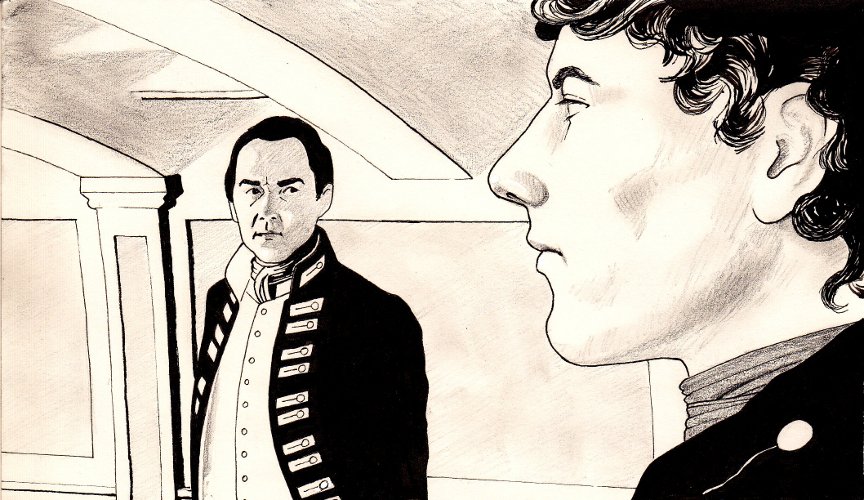 This is just ink and pencils. I spent quite a lot of time colouring it, but in the end I think the couloured version turned out worse. I drew this as an illustration to my story, but you might recognise it as a scene from the end of The Frogs and the Lobsters.

Captain Pellew talkes to Horatio about duty, as an encouragement after the failed mission at Quiberon. I think that is exactly the wrong thing to say in that moment. Horatio already takes his duty too seriously. I like the episode, but I dislike the ending. You could almost interpret the ending as if it's all right to commit any atrocities, as long as you are following orders! 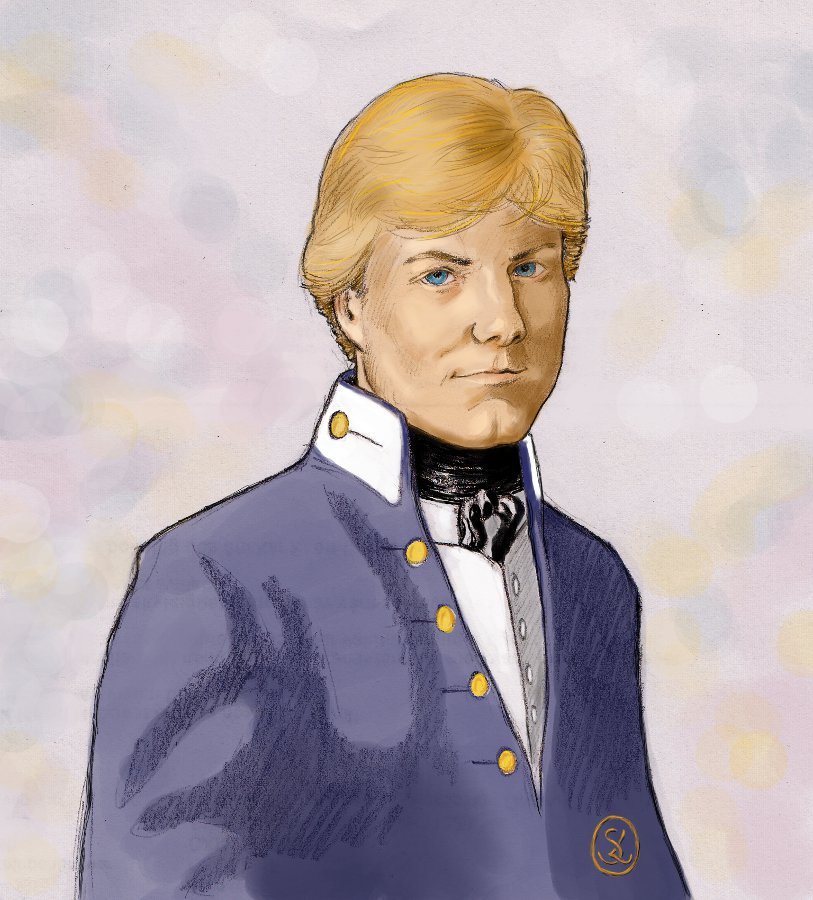 Archie Kennedy turned out better in colour. Just a random portrait in a midshipman's uniform.

I've been lurking in the XMFC-fandom for a while. I was especially impressed with the reverse big bang-stories and of course also with the concept reverse big bang itself. The stunning art..! All the incredible stories!

I painted this watercolour while imagining all kinds of stories behind it. I don't know myself exactly what is happening here - perhaps Raven and Erik are hiding somewhere shortly after Cuba, mourning their lost allies? Perhaps they are listening intently to the radio? Or planning some terrorist attack? 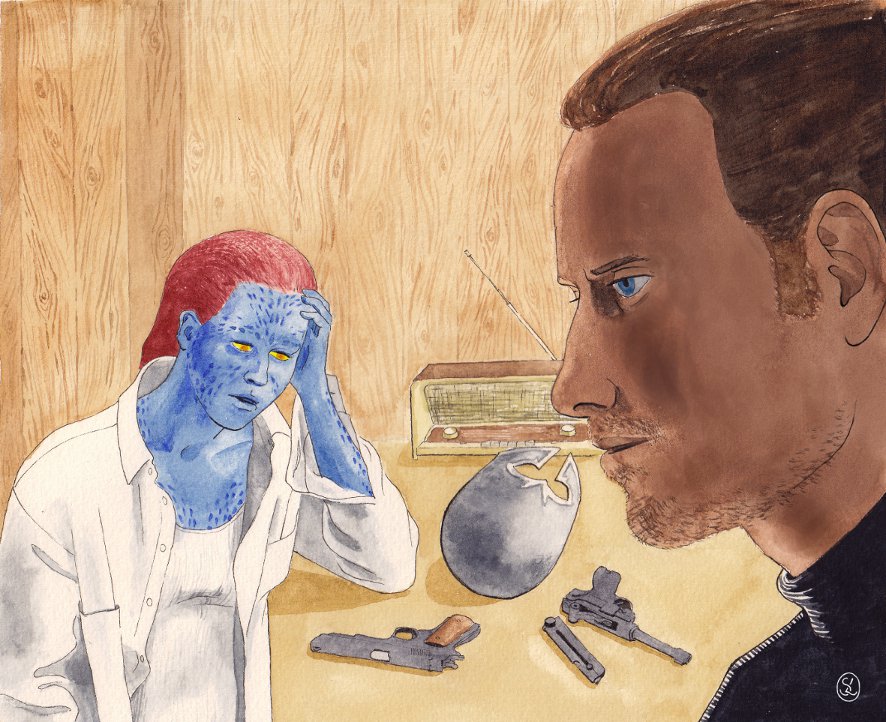 I also randomly painted James McAvoy, even though he doesn't look much like Charles Xavier in those clothes. Perhaps he doesn't look much like James McAvoy either. He is more difficult to draw than Michael Fassbender...

Hello! Here is a watercolour made from some pictures and stills from the BBC series Parade's end. I've always been fascinated by the first World War. The western front seems like such a perfect example of utterly needless death and suffering. The whole war started due to alliances and promises between the different countries in Europe, but I've never read of any more tangible goal for any of the countries. Was there a particular piece of land they fought over? Trade, natural resources, religion, or political ideology? Did anyone in the different governments have a clear view of when they would be satisfied with the outcome and start negitiations for peace? It seems everyone just fought until exhaustion for no discernible reason.

Here is the first picture of two for AJHall and her wonderful Sherlock story Adequacies. http://archiveofourown.org/works/130062
I know the leopard was supposed to be in the kitchen, but I wanted to draw it on the sofa where Sherlock lies sulking in one of the episodes. It is so difficult to use colours! It takes an enormous amount of time. I begin with a sketch I like, then, as I colour it, the faults seem to grow more and more apparent. The colours don't fit together, one part looks like it's floating above the rest, I can't get the shadows right. And the fur! The pattern took ages to make passably like a leopard, and then I was so tired of it, I entirely gave up on texture. *deep sigh* Well, I'm posting it now, so I'd better be finished!

There is another illustration for this story on the way, and I intend to work on ot this week and hopefully finish it soon.

A young Dr Watson before his injury. Fanart for Pompey's story http://www.fanfiction.net/s/4029558/1/On_Afghanistans_Plains Some time ago (two and a half years, actually) I read a story about Dr Watsons time in Afghanistan:  the battle of Maiwand, his injury, recovery and travel back to London. I drew this picture... Then I thought I might colour it... and so, after a couple of days work and a couple of years doing other things, I am posting this at last.

Perhaps 2 weeks ago, I read Starved For Your Touch by

kellen_lee ( http://kellen-lee.livejournal.com/1450.html ). Really lovely story! So I made a fanart to her fanfic...( Collapse ) John's face is a bit strange... And I am really not very good at colouring things with the computer. I didn't post it for a while because I wasn't satisfied, but then, well, what's the point in drawing something for someone and then never show them? At least I think they show the right feelings.
Collapse